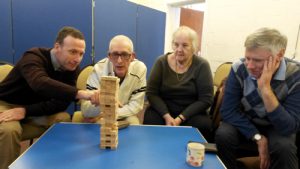 [All throwing games mark the position to stand to throw, masking tape is useful for this.]