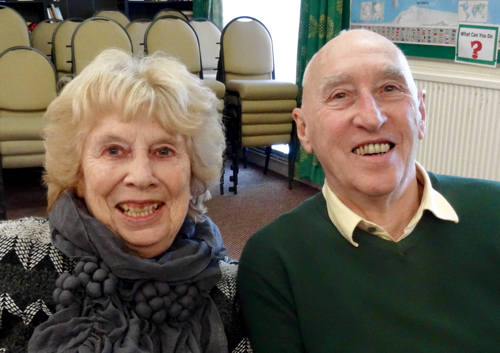 Janet and Alan are a married couple who regularly attend Senior Moments. Their journey to faith in Jesus began when Janet was invited to Senior Moments by a friend.

A friend invited me to Senior Moments. She told me about all the different activities and that you had tea/coffee and cake and that it was all FREE. This seemed too good to be true so I didn’t take her up on her offer. She asked me several times and in the end I decided to go.

I was so amazed at the kindness of the people who ran Senior Moments that I felt drawn into going and went back time after time. The friends I had originally gone with stopped going, but I continued to go because I had made new friends there.

One day Jan, one of the organisers, told me that the church was starting a discussion group on faith and Christianity. Alan had been studying various religions and was going through a bad patch, so I asked if he was interested in going. We started going to the group and soon realised that the other members of the group had something special in their lives that we lacked. This was the start of the journey that led us both to faith in Jesus, Baptism and Church membership. We continue to be active members of the Church and know that this is the best thing we ever did.

[Janet passed to glory after a sudden illness in the summer of 2019. She is greatly missed.]

After I retired I took an Open University course in Humanities, specialising in Comparative Religion. I got a 2.1, but to me that was failure to get a first, and I didn’t even bother to go to the ceremony to pick up my degree. In the meantime I had been diagnosed with type 2 diabetes, which required a short period of hospitalisation. I was on a strict diet and permanently weary. I was depressed.

I had encouraged Janet to go to Senior Moments because I thought it a good idea for her to extend her circle of friends. I had no intention of going myself. When Janet suggested that we should go to the study group at the Church I thought that it could be interesting to find out what the Church believed.

At the first meeting we found that we had been assigned to the beginners group which was led by Nigel. He was so sure and confident in his faith, and so knowledgeable in his explanation of the basis of his beliefs from the biblical texts that my early scepticism was soon allayed.

After two years of study and growth Janet and I both decided to be baptised and become members of the Church, and I too am a regular at Senior Moments, although I usually don’t have the cake!